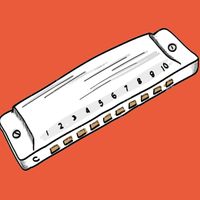 Eight Bar Blues in A
We add this groove for a big reason and that is, the chord arrangement and slightly different changes. Some of the bigger blues 'hits' were eight bar grooves instead of 12. Maybe because Americans seem to prefer an even division of beats. Where in other cultures like Europe and Brazil they enjoy timings like 5/4 or 7/4. Listen to the song "Take Five" by Dave Brubeck for an example of 5/4 time, and "Money" by Pink Floyd for 7/4. It very difficult for songs like these to be in the top 100 because people are more familiar with an even number of beats. Eight bar blues can be viewed as two sets of four or four sets of two, either way it’s nice and even. The bass walks nicely with quarter notes right on the down beat (one-two-three-four) while the drummer hits quick 8th note triplets (one-two-three, one-two-three) on the ride. This is an easy groove to make up a melody and lyrics to, perhaps another reason for eight bar blues hits like Little Walters "Just Your Fool" or Junior Wells "It Hurts Me Too". A little different arrangement of the eight bars and you have hits like "Key To The Highway" recorded by many, including Little Walter, or "Bring It On Home" by Sam Cooke, and many others. A collection of blues grooves would not be complete without this groove.